I was very excited to go to Theatro Technis, a venue I had previously not visited to see Perfect Lovers, and I was not disappointed. The moment you walk in, a bed framed in the middle of the space, gives you a taste of what is to come. The bed is not only a very sensual place, but also a personal space for any couple; this is the central point of the play, we as an audience are given a ‘fly of the wall’ perspective of these couples’ lives. As a play it explores what we all strive to find in our relationships, the constant idea of what we have not being perfect, and that maybe there is something better out there. It demonstrates this through the relationships of four gay men in the city who all at some point are intimate with one another whether this be sexual manipulation, revenge, to find love, or just the desperate yearning to be wanted. It was a poignant representation of the lives of modern gay men, offering some genuine comedy merged with moments of high emotion.

It is a testament to all kinds of gay relationships whether it’s the honesty you share on a one night stands or a couple who have shared everything, the erraticness of love and the flipside of pain and revenge. It cleverly delves into the complexities of human relationships. This is thanks to beautifully open performances from the actors, who were fearless when it came to intimacy on stage and approached the roles with a genuine freshness. It is also of note that they avoided stereotypes, giving a broad perspective of a range of relationships, played with honesty and integrity.

The cast are fantastic, they work truthfully and in rhythm with one another, I’d like to touch specifically on Craig Deuchar’s performance, he showed a true connection to his character throughout and as an actor had great comic timing and a good relationship with his fellow actors.

Theatrically there were some amazing moments, some brilliant direction from Jazz, however at times the pace felt a little slow to me in some of the more emotional moments, perhaps further delaying the climax or the play. The integration of technology within the play via projections was very effective and offered an additional layer to the work. The references to apps such as Grindr, only increased the relevance of this play in the 21st century. It also took away the seediness of such exchanges.

The final tableaux has remained with me, and brought the artistry that we saw woven through the story and performances to a beautiful close. 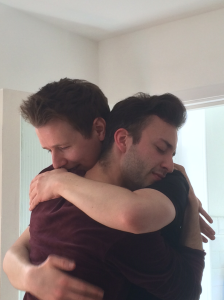