Astrid (Kirsty Bushell) doesn’t define as gay. She pays prostitute Isabelle (Chipo Chung) thousands of pounds, not for sex – well, not just for sex – but for her company. Working in the testosterone-fuelled City, Astrid yearns for female conversation and tells Isabelle she’s the first female friend she’s ever had.

Priya (Ellora Torchia) is new to the City. She tells Astrid she wants to make money – lots of it. Astrid takes her under her wing, instructing her on how to survive and indeed thrive in a world where a financial junior’s duties range from sourcing coke for their clients, to sucking off a maitre d’ to secure a reservation at Heston’s.

Amy Hodge’s production is fun and fearless, with song-and-dance routines – in keeping with the music-hall surroundings of Bush Hall – breaking up the action, and serving as a wry commentary on events.

The decision to cast women in all roles is bold but makes complete sense. The gender blind casting is never played for laughs. If we find boss Arthur (Helen Schlesinger) or Priya’s posh-boy rival junior Harrison (Emily Barber) funny, it’s only because we recognise the truth of their characterisation.

But, despite the strength of the ensemble, as the ruthless but magnetic Astrid, this is Kirsty Bushell’s show. Whether draped across the grand piano that sits at the heart of Jo Scotcher’s set, belting out torch songs, or giving the audience a masterclass in ‘going on top’, she charms and seduces us to such an extent that we almost forgive Astrid’s Machiavellian behaviour.

Playwright Melissa Bubnic shows us the true meaning of ‘a man’s world’ – if any woman wants to infiltrate it, she must play choose a role to play. On the surface the play serves as an exposé of the misogyny we all know exists within institutes such as the City. But Bubnic’s trump card is the suggestion that we all play roles in order to negotiate the world, and that to some extent our gender is just another one of those roles.
© Sebastian King 2016 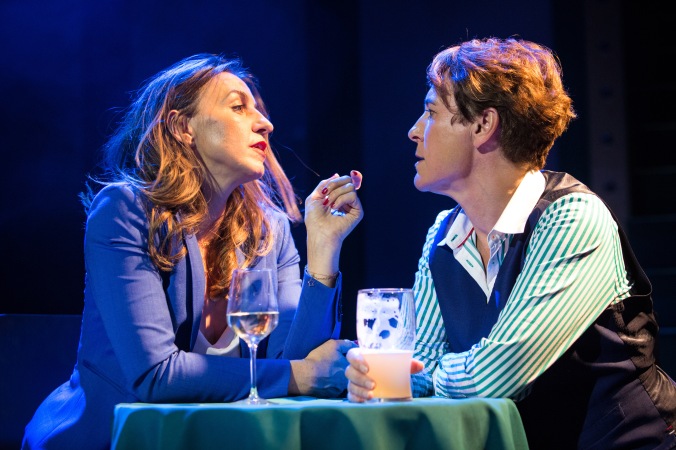