If you were to combine the witty absurdity of Monty Python with the camp irreverence and wardrobe department of Austin Powers, then underpin it all with a wry sociopolitical commentary you would have Gareth Corke’s revival of Colin Spencer’s 1968 hit Spitting Image.

The play is a breakneck farce that follows the lives of London couple Tom and Gary as they prepare for fatherhood. The child was not exactly planned – baby Andrew careers into their lives not through adoption or IVF but because Gary is pregnant. Naturally. As the men adjust to this sudden new arrival and the subsequent joys and strains he brings to their life together, they have their work cut out for them as the play unfolds – endlessly dodging and deceiving the various busybodies desperate to investigate this biological phenomenon, flanked by an ever present mercenary of 1960’s homophobia.

Neil Chinneck plays anxiety-riddled playboy Tom with earnest and unwavering energy – a suitable antithesis to boyfriend Gary (Alan Grant) who is played with an almost zen-like resolution at the prospect of being the next Virgin-Mary-of-sorts. Amy Ambrose charms as Sally, the quirky and ever hopeful friend turned accomplice who still holds a flame for Gary. The rest of the play is peopled entirely by a swiftly changing chorus of two; Paul Giddings and Rachel Gleaves take on an impressive number of characters, swapping roles rapidly from scene to scene, with Giddings’ cameos spanning from Tom’s narcoleptic father to a closeted cockney policeman and Gleaves jumping from baffled Irish midwife to Tom’s tyrannical middle-class mother and both actors covering every other being in between.

The script itself is certainly esoteric – even in 2016 – and demands a lot of trust and suspension-of- realism from the audience. The sheer number of characters combined with the speed at which the play hurtles forward along with the verbal density and anachronisms of the text makes it a tricky plot to follow. More than once I found myself needing to take stock and recalibrate the rules and given circumstances of the world. The heightened and ludicrous nature of the characters also made it difficult to properly invest in their journeys; even with farce the characters must have total integrity and when it came to the more cathartic scenes, I found myself struggling to truly care about these whimsical caricatures. Whether this is down to the writing or the revival is hard to pinpoint but perhaps after a few more runs of the show and the fine tuning that comes with confidence and familiarity, these technical creases will be ironed out somewhat.

Colin Spencer writes in his author’s note of the polarity and controversy that arose from the play’s debut in 1968 – many audience members were booing and certain reviewers were spitting and yet it was an absolute sell-out season. There is no doubt that the boldness and pride of Spencer’s writing was unprecedentedly brave and that in itself is something to be commended. Beneath the farce of Spitting Image there is a highly intelligent political narrative and some brilliant one-liners that parody the hypocrisy of bigotry and celebrate the enduring beauty and strength of queer identity. The play refuses to shy away from the real issues and yet presents a refreshing, light-hearted change to the depressing narratives of tortured souls and stigma that preceded queer themes in theatre at the time of its original performance.

As one of Spencer’s many cameos wryly exclaims at the conclusion of the play: “How wonderful it is to be surrounded by happy homosexuals!”

Spitting Image runs until August 27th at the King’s Head Theatre. You can buy tickets and find out more here. 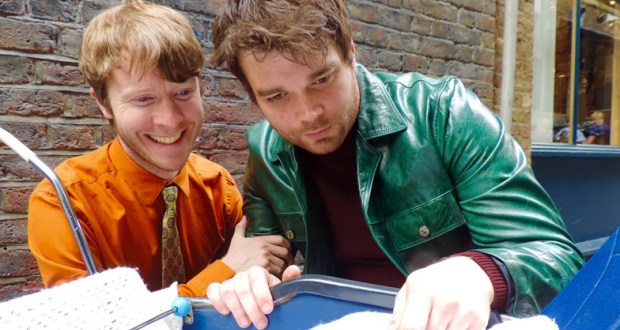