A Curmudgeon’s Guide to Christmas Round Robin Letters,
The Hope Theatre
5*

Every year, we get several round robin letters, mostly from relatives in far-flung places, and a few of my parents’ old colleagues. They’ve petered out over the years, especially with Facebook and so on. The updates of holidays, exam results and kitchen extensions are nice to hear, for the most part. But there’s one that we always look forward to – someone my dad worked with, who gives us a blow by blow account of her year, scattered with people we don’t know, right down to days out she’s enjoyed. It’s bizarre, smug, and too. much. detail.

A Curmudgeon’s Guide to Christmas Round Robin Letters is about exactly this sort of letter. It drew me in with jokes and poking fun at something that is very familiar, then caught me by surprise with a poignant note that, too, is very close to home: the difficulty of breaking the news of loss, often some time after the fact, and how getting that news which brings up our own griefs. The way that there’s never any warning, any idea of what we’re about to read. But just as quickly – like the letters themselves – the play picked us back up with jokes and messing about and hope.

Taking the form of a Christmas party in a lesbian couple’s front room, this play was a rare thing: audience participation that actually made me enjoy it more. We were immersed right from the door, with the actors welcoming us and chatting to us as we sat down. During the play itself, we were given Christmas crackers and party hats and sweets, and we all did a crossword together – not too much participating, you understand, but certainly more involved than your average play. I felt involved and it made the emotional parts all the more moving as, in that short space of time, I was extremely invested. I really loved the couple dynamic, too: it says in the programme that it was originally about a straight couple, but that it was changed to two women partway through adapting the piece. I found this so refreshing, and I loved how normal and natural it felt.

We left feeling uplifted, giggling and hopeful. A Curmudgeon’s Guide to Christmas Round Robin Letters is a snapshot of one tiny bit of one couple’s lives that feels universal and relatable and put me right in the Christmas spirit.

On at the Hope Theatre, London, until 23rd December. Book Now. 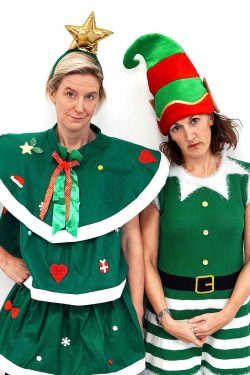