Next week Katherine McMahon will be at The Camden People’s Theatre with her spoken word, theatre show Fat Kid Running, in which she explores fat activism and exercise through the lens of personal experience. LGBTQ Arts’ Amie Taylor interviewed her to find out a little more about this piece.

AT: Tell us a little bit about what audiences can expect and what it’s about…

KM: It’s a spoken word, theatre show so it inhabits that cross over between a play and a big, epic poem.  It’s about my relationship to exercise and my body as a fat person and a woman. It’s very much from the point of view of the kid that was always skiving PE and resented being made to do any kind of exercise.  It’s about the way I reclaimed movement over many years. And the reason I started writing it was because once I’d worked out how to start doing movement for myself and not for any external reason, like thinking I should be thinner or thinking I should for some moral reason,  I discovered that I actually really loved moving my body, as I think a lot of people do.  I was really angry that it had been taken from me for all of those years, and that I was made to feel like it was something I couldn’t do – that it was this complicated thing that I felt I should be doing, so rebelled against it by not doing it. It was something I wrote that would hopefully would help other people to reclaim that.  So it’s coming from a feminist and fat activist position, I would say it’s about radical body love.

AT: What’s your background in theatre and spoken word?

KM: I’ve been a poet since I can remember, and I started to take it seriously when I discovered the spoken word scene in Edinburgh about 7 or 8 years ago, so I built up my performance poetry practice and a spoken word theatre show felt like a really great next step, to challenge myself.  This piece came around because I was writing a lot of things around this topic, and there was far more than would fit in one poem, so it was asking to be written as a long narrative which is great as  that gives me the opportunity to really explore it.

AT: How have you found making a solo work and what have the challenges been?

KM: I’m using to working on stage on my own, but doing a whole show on my own is a whole other kettle of fish. I think it was one of the scariest things I’d ever done when I first did it, when it debuted back in May in Edinburgh.  It was also one of the most vulnerable things I’ve done because I wrote it and I perform it – it felt like metaphorically stripping naked on stage in front of everyone I know.  But the rewards of that are also great, because once I’d done it and I got an amazing response, it was the best feeling in the world. So making solo work is really hard, but I get to say what I need to say.

AT: You mentioned being an activist, can you talk a bit around your activism and how it influences the work you make, and vice versa?

KM: I used to do a lot more straight up activist work, when I was a student the first time around, I helped to run my university feminist society amongst other things.  As I’ve got older I’ve seen the potential of, particularly something like spoken word, which is very accessible, very inclusive you’d hope, to be a force for change in the world.  And for me it was an important thing to realise – that my activism could be my art. And now I also really enjoy things that create the cross over, for examine the BP or not BP campaign – which is a campaign against the sponsorship of cultural institutions by oil companies – I think their work is really amazing.

AT: And who is this show for?  Did you have a specific audience in mind when making it?

KM: It sounds cheesy, but anyone with a body – so everyone.  I think our cultural relationship with our bodies is a big mess, and I think particularly for women and particularly for fat people, and then other people who I don’t want to speak for because I don’t have the experiences they have, but there’s obviously a lot of intersections with different kinds of bodies.  I think it’s really important to talk about that stuff and reclaim our bodies for ourselves. 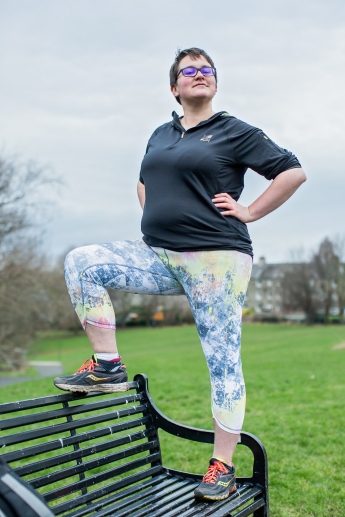