Alan Flanagan’s new piece, Bingo, comes to The Pleasance Theatre, London this June. In it we follow the life of Cormac, an Irishman determined to unspool his sexual history, focussing on the moments he takes an STI test and discovers he has… EVERYTHING!  LGBTQ Arts’ Bj McNeill caught up with Alan to find out more about this piece.

Bj: Can you tell me a little bit about Bingo?

AF: Bingo is the story of a guy called Cormack, who is rather sexually free. He goes for his first STI check up and the stars align for whatever reason and the doctor turns to him and says ‘you have pretty much everything’. It’s a story about when something tragic happens, and it’s so tragic that it becomes comedic all over again and Cormack starts to wonder, how the hell has this happened to me?

Bj:Why is Bingo important for our contemporary society?

AF: I think it’s one of those things where everyone knows that it is really important to go for STI check ups but everyone is still a bit terrified and uncomfortable talking about it. That is why I wanted to write the show. It’s one of those weird things where it is pretty much relevant to pretty much everyone, yet so few people seem to want to talk about it. If you are afraid or are unwilling to talk about it or if you’re not willing to go for a test then it is a case where you don’t know what you’re walking around with basically.

Bj: What was your process for writing this particular play?

AF: It was two things actually… A while ago, about a year and a half ago when I was in for my regular check up. I was sitting with the doctor and she did that kind of, the pause that they (Doctors) sometimes do when your mind fills in all the blanks and you go oh my god this is going to be some big news…then it was nothing. However in that moment I thought: god, what if she just started reading a list and it was just the list of things that I had contracted, how ridiculous and how horrible and how strange that would be, that’s when the idea came to my head.

Then the point at which I felt the need to write the play was when I went back to the same clinic. It’s near my house, so close that I can jog there, so I was jogging there and I literally ran into a locked door with a sign on it saying we shut down. There was no correspondence to the people in the neighbourhood, there were no texts sent out, even though they have patients numbers, they just shut down. That’s happening everywhere. So that inspired me to actually get off my arse and write the show because I think it’s something that is not being talked about enough and because its not being talked about enough its very very easy to gut the funding; people are uncomfortable about campaigning about it. Usually it gets left to queer people. We are the ones that are fighting for sexual health. That’s why I wanted to write the show, it was an in on that whole debate and an in on a path that’s really strange, weird, funny, interesting and specific but also talks about the idea of sexual health in a wider context.

Bj: How important is it for you to focus your work on the LGBTQ+ community and why?

Out of pure selfishness, because I want to see more of myself. I think that’s why more diversity in writing is helpful because that selfish gene comes up and the writer goes well I want to see more people like me because I don’t see many of them. Basically I’m just incredibly selfish [he laughs] but apart from that, there are so many interesting stories in the queer community, historically there always has been. But now we are all in this weird kind of almost teenage like years where its kind of like everyone said ‘yes you’re ok, most of you are ok, some of you were not ok with but most of you are ok, but as long as you kind of act like this and do this and be straight’ I find that a really weird thing because it’s not this fighting for acceptance but there is all this stuff going on underneath where you go: oh wait we’re not normal and we never wanted to be normal, so why do we have to act normal now? Within that arena there are so many weird, interesting stories. I think there is just a lot to work with when you are working with queer stories in a way that there aren’t always with people who don’t have the same history as us.

Bj: What is the political strength of the play?

AF: That you experience it through a person that you understand, like, comprehend and sympathise with. I think that’s the only way to think about (political) things, to go: this could happen to anyone but (in Bingo) it’s specifically happening to this person, Cormack, who you care about and you like. I think that if you go into a political drama that’s waving its flag and going I’m political drama, it can make me often disagree because I feel like I’m being lectured. This show you just walk in and there is this guy telling you the story of what happened to him. And throughout that sympathy, you think ok, what is the wider context? With anything political you have to start with characters and interesting ideas and the politics get layered on top.

Bj: What do you hope to give to your audience?

AF: Offer people a good time and a perspective that they genuinely have never heard before, make them disagree with each other, that’s always fun.

Bj: During this process did you discover any darker implications from contracting an STD or STI that you didn’t know about?

AF: You know what? Weirdly the opposite in a lot of ways, I talked to a lot of doctors about it and people that are HIV positive to make sure that I had fairly rounded perspective on things. There were things that I wasn’t aware of like the idea of biological children and that it’s possible if you’re HIV positive and I didn’t know that hepatitis clears up on its own in most cases. I found a lot of positives in it. One doctor told me that he really likes working in sexual health for that reason; it’s the one area of health where you can usually turn to someone and say you’re going to be fine. In most areas of medicine that’s not the case.

Bj: What about cuts to sexual health within the NHS?

AF: The bad things I discovered were to do with funding. The constant conversation at the clinic is; the cuts the cuts the cuts, how up against the wall everyone in sexual health is and how much people don’t know about it. That’s been a really sad thing, seeing all these really talented hardworking people going I don’t know where my job is going to be in a year. The government just keep cutting and cutting and cutting funding and no body is talking about it. That is what was really depressing is that we’ve come so far, especially with things like HIV and then you have government saying well no we wont prescribe PrEP we’ll do a trial instead even thought trials have been done in many different countries already. That’s what’s infuriating considering we’ve come a hell of a long way.

Bj: With a social climate where funding is needed for so many different causes why sexual health?

AF: You put a pound into sexual health you save £11 down the line its an area of health where you put money in and you save money. Watching that being eroded just pisses me off.

Bj: Finally, why should people come to the show?

AF: They will have a great time! I did not write the show to be a difficult harrowing experience; it’s going to be a good time! 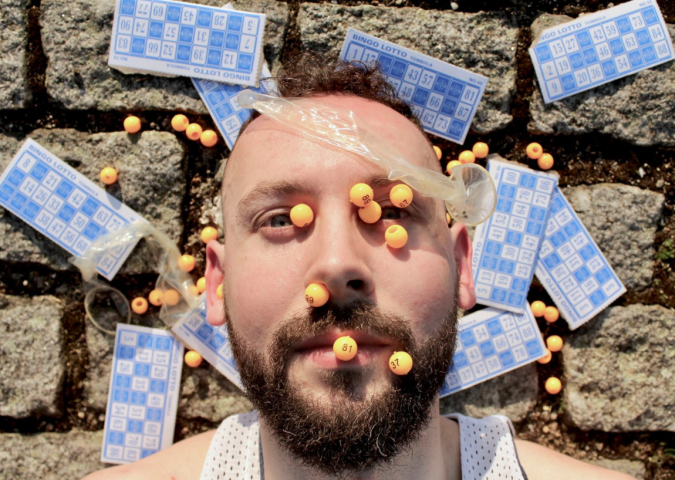