Barbara Brownskirt, the poetry sensation, is heading to the Edinburgh Fringe to spread the word about the patriarchy via her show Who Do You Think You Are? Barbara Brownskirt.  We felt incredibly fortunate to catch her with a Q and A before she heads up there.
1. What inspired you to become a poet?

I never had to wait around to be inspired to become a poet. I was born the same day that Silvia Plath died and Mummy told me she felt Plath’s spirit zap straight into the stirrups and into me as I left her uterus. The first word I ever spoke was “syntax” so it was obvious to everyone what kind of path I would take.

2. Tell us about your show up in Edinburgh…
It’s on at the Front Room at Assembly Rooms every night from 6.20pm and there will be chairs to sit on.

It’s a brilliant knee-length one woman show and will provide a thought-provoking insight into the Epic poem I have been writing for four and a half years. Charting my life as a lesbian poet in 21st-century Britain the show also contains twenty-two volumes of poetry, Penge-based home-made films, multi-media odes to Judi Dench, anti-Jeremy Clarkson verse (cardboard safe spaces will be provided if anyone is triggered by any dark thoughts resulting from discussing certain sticky subjects).

3. What inspired you to go to the Edinburgh Fringe?

To spread the word and encourage more people to WAKE UP and smell the onions about how the patriarchy continues to silence us. We may have the vote, but most women can’t even wear a knee high pop sock with a plain brown A-line skirt without worrying whether someone will judge their knees in some kind of warped version of Miss World.

4. What can audiences hope to experience during one of your shows?

Inspiration, political understatement,  a sense of calm feminist reasoning, flexing of pelvic floor muscles, and some top notch poetry which doesn’t always rhyme. Please note THERE WILL BE NO AUDIENCE INTERACTION AS I AM NOT INTERESTED. It is my show.

5. Who is your biggest inspiration? 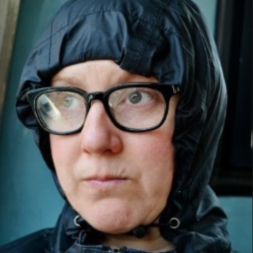