You almost feel the hangover starting to kick in as you exit having watched Drip Feed: from the debauched nights in Cork, to too much booze and a similar amount of drama, this compelling one-woman show is likely to have you hooked from the opening.

A collaboration between London’s Soho Theatre and Dublin’s Fishamble, written and performed by Karen Cogan under Oonagh Murphy’s sure-handed direction, Brenda is in her 30s, searching for purpose, whilst trying to find her way being a queer woman in Cork in the 90s. A scene in a club was hugely reminiscent to me of my teen years, and I’m sure will be for anyone who grew up in a small town, where you knew most people in the room, and even if not – you were all friends. Another scene in which Brenda lurks in a stalker-like fashion outside her girlfriend’s house, then steals a naked picture from a dustbin that someone has painted of said lover, makes us all hope that we are not and have never been that person.

It’s a play about community, fear of becoming a part of the furniture of the place that you grew up in, but also a fear of who you become when you leave that community which has so become a part of who you are. It takes a frank and unglamorous look at loss, grief, mental health, alcohol and drugs, in an unsensationalised way- Brenda seemingly bats many of these things to one side – they’re all just part of life for her. It also excavates the life affirming qualities of strong female friendship and role models.

Without giving any spoilers – a huge glitch in the plot for me was a dead lesbian, I would love to see as many plays as possible where lesbian’s don’t die – it’s a trope we seem to have had enforced on ourselves -that we can be queer, but we can’t have happy endings.

Saying that, the gripping storytelling and talent of Cogan keeps you on the edge of your seat throughout, catch this show while you can, it’s a rare gem in London’s theatre landscape. 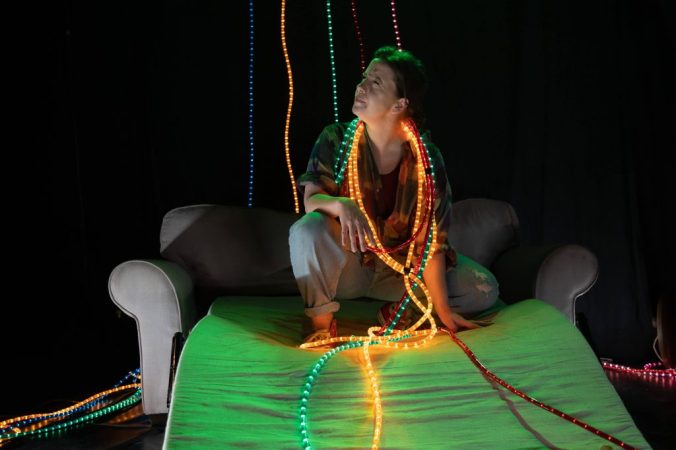