Holly&Ted first came to our stages with Pond Wife in 2015 – an new, feminist take on the very old tale of The Little Mermaid – with 90s pop included.  They returned this year with Polaris, a show exploring toxic masculinity and negative / destructive language.   This week they come to Theatre 503 in London with this excellent new show – we managed to catch up with them to find out more…

A: First of all, for all of the people that don’t know who Holly&Ted are, tell us a little bit about you…

H: Well, we first met at Playbox Theatre, which is a lovely young people’s theatre in Warwick. Then we studied together at Dartington in Falmouth, which is where we really got to know each other and started to work together to develop our work more. Then afterwards we decided to carry on making work, and were some of the only people that wanted to pursue that, which was interesting as it was a theatre course, but we did and our first show Pond Wife was born.

H: Yes, we had some of our first previews, at Playbox Theatre in late 2014, then our first run of it was in 2015, we performed at Camden Fringe, Brighton Fringe amongst other places.

A: What took you from Pond Wife, your debut, to your current show Polaris?  Was there a link, or did you take a leap? And what inspired this show?

H: I don’t remember that – but there were a lot of conversations.

T: There were a lot of disparate conversations happening – and then 2016 happened which was just a weird-ass year in general. We were at the Fringe a couple of months after Brexit was voted for, and a couple of months before Donald Trump was voted in, and we were thinking about the power of words and the way that people talk to each other, and the way the media refers to certain people and wanted to create a show about different people who were connected by the words we use to describe them.

H: I think also after Pond Wife we wanted to make something a little bit heavier; Pond Wife was a very joyous and bright show and we wanted to explore some of the darker themes to our work, and to give it a bit more depth and breadth and to push ourselves; to make it different and try new forms and different styles of theatre. Which is why we also got a sound designer on board –

T: Yes, Graham [the sound designer] has been amazing, and people seem to really enjoy that element of the show.  He’s built us instruments that we play live on stage to create the soundscapes for the different worlds. We have these tables that have contact mics on them, then we run them through a program on an i-pad to create the sound of each world, and all of that happens live in front of an audience.

A: You talk about using new styles of theatre for you – what were they?

H: But I also think this show is a lot more script heavy than Pond Wife was –

H: So that’s been something to manage and to orchestrate the huge amount of text we have to speak; it’s been interesting working in that way with less movement and dance routines.

A:  We’ve talked about the style of Polaris, but could you tell us a little more about the content  –

H: It’s an exploration or overview of toxic masculinity in various formats, and a look at negative and destructive language in everyday life. So it follows three worlds – the dinosaurs who are having conversations in relation to the ‘immigration crisis’ – with that sort of language being used. There are two girls from the 90s and their language is centred around consent, slut-shaming and that sort of thing. Then the astronauts in the future talk about women in the workplace. It’s not a deep exploration of any of these subjects, it’s more an overview of what the negative language is, and how it blends in. Then we have Polaris the star looking over it all.

A: What are you hoping people will take away from watching?

T: I hope they may think more about the way that they speak. If people leave the show and think – ‘Oh, I’ve said that before’ or ‘I’ve described someone like that – maybe I should stop’ then that’s an achievement. The show is a bit of a call to action in that sense. With a world where there are 24 hour newsfeed, we can become a bit desensitised to it, and we hope to inspire people to stop sitting back and watching – and start doing something. 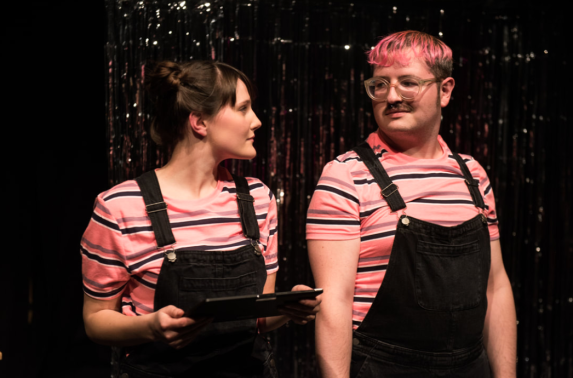