Victor Esses is currently up at the Edinburgh Fringe, with his show, Where to Belong.

“Victor Esses is Jewish-Lebanese, Brazilian, and gay. In 1975, Victor’s mother flees Lebanon as a refugee of the Civil War. In 2017, Victor visits Lebanon for the first time. In 2018, amidst the elections that will see Brazil choose a far-right president, he travels from London to São Paulo to show his partner the city of his childhood.”

We caught up with Victor to find out a bit more about this piece.

AT: Tell us a little about you as an artist and how you came to be doing what you’re doing now…

VE: I’m a Theatre and Performance Maker. I work with live art, storytelling and autobiographical material to investigate belonging and human connection for imagining and creating better futures. I like to make work that is very lo fi, real, simple in its execution and that it touches. I moved to the UK from Brazil to study film but went into theatre directing straight after uni. I directed many international texts in translation but felt like performing my own work, I always wanted to write autobiographical material and I started to channel that in my performance work that led me to Where to Belong. And after that to Unfamiliar, a show I made with my partner about queer families.

AT: You’re currently at the Fringe with your show, Where to Belong; in your own words, what is it about?

VE: Where to Belong is about connection and disconnection, about finding oneself and having to let go of people in order to do that. It’s about the migrant experience and the queer experience. About home and belonging.

It’s a show in which I invite the audience into my rehearsal studio to talk about home and identity, while I tell them stories of growing up in Brazil, being part of the Jewish community and moving to the UK at the age of 18, I ask them about their childhood feelings, their favourite food, and with this they help me tell mine and their stories. It all started when I went to Beirut, my parents’ hometown, for the first time and realised that the middle eastern identity was also a huge part of me. I speak of war, family, home, love, miscommunication and prejudice, while I create familiar images with simple objects found in my studio, in a multimedia environment where things transform all the time. Along the way of making this show a lot happened in Brazil, my country of birth, where the far-right took over and homophobia became very pronounced. This show is a call for connection, for looking at the other and realising our similarities more than anything.

AT: What inspired you to make it?

VE: In January 2017 I visited my parents hometown of Beirut, in Lebanon for the first time and that triggered a lot of questions about my identity, having been born and grown up in Brazil and then moved to London when I was 18 to be able to live my life as I wanted as a gay man. All of these quests inspired me. I speak of war, family, home, love, miscommunication and prejudice, while I create familiar images with simple objects found in my studio, in a multimedia environment where things transform all the time.

AT: What do you hope audiences will take away from watching?

VE: The audience is a big part of this show as I talk to them and ask them questions about their own childhoods, all in a very warm and inviting way. I bring them into my story and ask them to help me tell mine and their stories. And I hope that they have an emotional, cozy, sometimes sad, but very hopeful experience. And that they can look at the people around them in a more open way and find more acceptance to themselves as well.

VE: This piece speaks of so many things that are very current in our times. When I started making it this wave of divisiveness, exclusivity and individuality was reaching high ground. The more time passed the wave of right wing everywhere has been growing and spreading prejudice, racism, homophobia. Especially is Brazil where I grew up, homophobia is so overt these days with the rise of the new president, and I speak a bit about this in the show and the journey to São Paulo with my partner during the elections of that man. But also in Europe and all over really we hear of attacks to the lgbt+ community, to the migrant communities. This show is an antidote to that, a care and love attack back.

AT: Which artists / companies inspire you?

VE: My influences include the Swiss director Marthaler whose images are so simple and yet monumental, breath-taking and moving, Peeping Tom’s way to explore relationships and Chris Goode’s daring simplicity and way of breaking theatrical rules. All of them and others makes me feel alive. I’m very mesmerised by lots of my peers too.

AT: What are your post-Fringe plans? (If you have any?)

VE: Where to Belong will tour the UK in 2020. And I’m about to confirm the tour for my latest show Unfamiliar, about queer families also for next year. We opened CASA Festival at Arcola Theatre with it last July and will go back to rework it at the Marlborough, Brighton in January next year. Immediately after the Fringe I’ll get back to rewriting a play I have been developing at Soho Theatre’s Writer’s Lab about brotherhood and where we can connect with people who are very different to us. And there are other projects starting to be developed in Autumn. And I’m starting to develop a brand new project about keeping and letting go in life, and Marie Kondo. 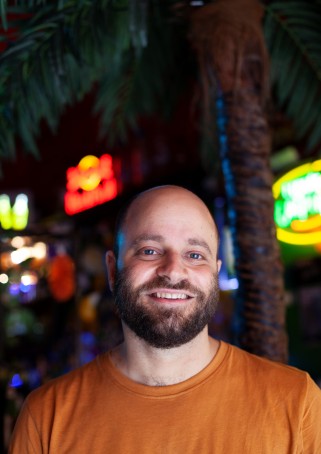