Cerys Bradley and Rachel Wheeley are currently at the Ed Fringe performing The Unfortunate Bisexual. We caught up with Cerys to find out more about this show and how the Fringe has been so far…

Amie: Tell us a little about you and an artist and how you came to do what you do…

Cerys: I’m a researcher by day – I’ve just finished my PhD and now I’m working with an LGBTQ+ anti-violence charity on a research project about transphobia. I’ve been writing and performing stand up comedy, on and off, for about ten years mostly as a creative outlet. More recently, my comedy has taken on science themes, so I write parody science lectures or draw silly graphs for punchlines, that sort of thing. Rach used to work in radio and now runs the podcast Level Up Human. She was shortlisted for the BBC New Comedy Award in 2018 and performs stand up comedy about her life and what it was like to grow up at Eton College as a girl.

Amie: Tell us about your show, what is it about…

Cerys: The Unfortunate Bisexual is about bisexuality. It’s a stand up comedy show in two halves – Rachel does 25 minutes then I do 25 minutes. We both talk about our lives, coming out, and that times that we have struggled to call ourselves bisexual but also the reasons why we like being bisexual.

Amie: What inspired it?

Cerys:  I run a podcast, called the Coming Out Tapes, and interviewed Rachel on it. The show was conceived in the outtakes when we were chatting about Section 28 and how we have both, at times, been reluctant to call ourselves bisexual. We found that we had a lot of common experiences but also very different ways of being bisexual/expressing our bisexuality and we thought it would be fun to do a show together that showed that.

Amie: What do you hope people will take away from watching?

Cerys: Well, hopefully, everyone will take away the feeling that it was a funny show that they want to recommend to all their friends. Hopefully, the bisexuals in the audience will like the show and think that it’s nice to see comedy about things they can maybe relate to. We both have some material about misconceptions of bisexuality and how to push back against them so it would be nice to think that some audience members feel empowered by that. For our non bisexual audience members, maybe some will find it educational (as well as funny) – we would love it people who don’t know much walk away being a bit more aware that bisexuality exists is more than the stereotypes imply.

Amie: Describe the show in 6 words…

Amie: What is your experience of the fringe so far?

Cerys: The fringe so far has been pretty intense. Thankfully, we’ve had each other so we can flyer together, celebrate when the show goes well and strategies when it doesn’t. Most importantly, we’ve seen a lot of amazing and brilliant theatre and comedy at the fringe so it’s been really nice to share that. We’ve both improved a lot from performing every day and also giving each other notes about our performances so, as a learning experience, this fringe has been great. 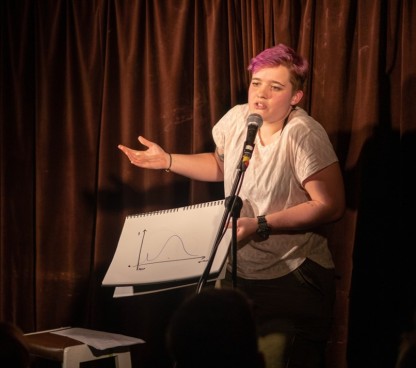